Enliven goes in to bat for critically endangered natives

Last week Trevor Marsh and Jeff Lynn of the Enliven Day Centre Men’s Group handed over three prototype Whare Pekapeka – Bat Houses – to Kay Griffiths of the Waipawa-based Conservation Company.
These are dwellings intended for long-tailed bats, which are native to Aotearoa New Zealand and critically endangered. They are threatened by forest and tree clearances and predators such as possums, cats, stoats and rats; “The Big Four” as Kay refers to them.

The Whare Pekapeka project has been a labour of love for Jeff, an Enliven client, environmentalist, and woodworker. Jeff has had a close affinity with native fauna all his life, citing a close encounter with a native bat that flew into his house when he was 17 as the spark for his enduring interest in the species.

Jeff joined the Hawke’s Bay Naturalist Club and later trained as a ranger with the Forest Service, which was incorporated into the newly-formed Department of Conservation in the late 1980s.

“I was part of the ranger team tasked with building a fence and planting trees at Cape Kidnappers to look after the gannets in the area. I still have the training manuals!”

Kay is part of the effort to safeguard longtailed bats in our region. She credits Hawke’s Bay Regional Council’s effective possum control efforts as a possible reason for the relatively good levels of native bat populations in the Hawke’s Bay region.

The Whare Pekapeka have been designed to resemble bats’ usual living spaces – trees, dead trees in particular, with small entrances they can wriggle into and space inside to roost.

Kay will report back to Enliven on the success of the prototypes. The Enliven Men’s Group based at the Enliven Day Centre in Pakowhai  Road, Hastings, will then adapt the design as necessary and produce as many as are needed to help protect these fascinating, vulnerable native creatures. 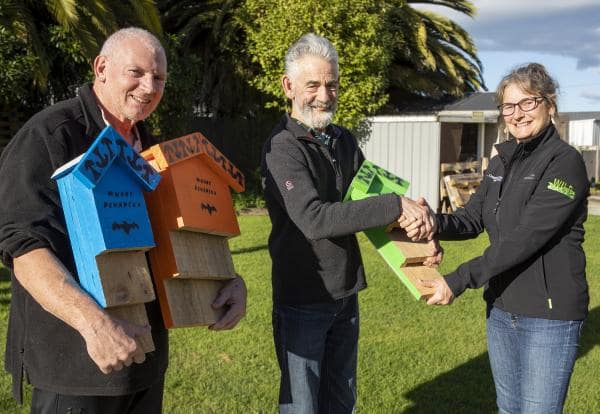 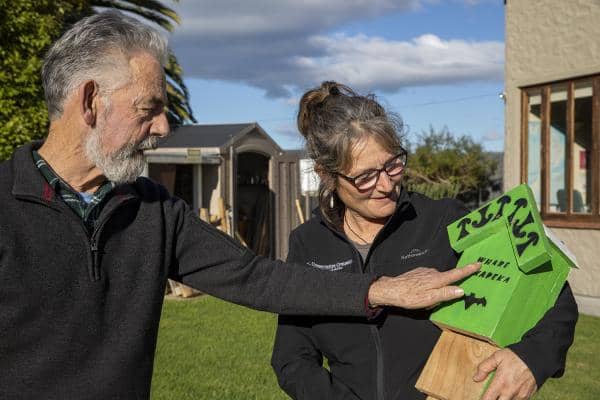 Jeff Lynn, Enliven Client points out detail of the Whare Pekapeka to Kay Griffiths of The Conservation Company