Woman who overcame adversity awarded Tauawhi Person of the Year

Woman who overcame adversity awarded Tauawhi Person of the Year 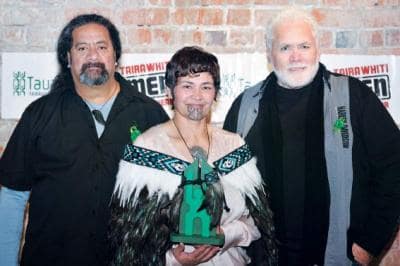 Men who do good work in the Gisborne/Tairawhiti community and seek no recognition for it were honoured at the Tairawhiti Men of the Year Awards on Friday, 15 June.

The ultimate accolade, though, a korowai and pendant, was presented at the end of the night to Tauawhi Person of the Year, Tricia Walsh.

After a history of sexual abuse as a child, gang crime, methamphetamine abuse and imprisonment, Miss Walsh broke the cycle and determined her own fate as a devoted mother, social work student and role model.

Anti-family violence advocate Vic Tamati announced the award with a story of his own. The room fell silent as he struggled with his emotions while describing his first “relationship”, his first sexual encounter with a woman, who, as a 15-year-old, he raped. His second experience was another rape.

He then described how he and another Tauawhi Men’s Centre member, Phil Paikea, heard Miss Walsh’s story at a men’s hui wananga then asked permission to wash and anoint her feet with oil as they sought forgiveness and apologised on behalf of all men for the violence she had suffered.

Her journey out of the life she knew had been long, said Miss Walsh.

“That started when a little girl, who didn’t know love, went out into the world and created chaos.”

When she realised she didn’t want that for her son, she turned her life around.

Aroha, dedication and passion on the part of men who made a difference to the community was what the awards were about, said Presbyterian Support East Coast Chairman, Maitland Manning.

“The pride and mana in this room is poignant.”

Most of the men nominated for an award did not want to stand in the spotlight. Among them was Manutuke School employee Robert Makara, who was described as not so much a caretaker but kaitiaki, guardian.

“He is a humble person who was reluctant to take this nomination,” said compere Victor Walker on behalf of Mr Makara’s nominees.

“He is the caretaker at Manutuke School but he is involved in all aspects of school life and a tireless supporter of the school and community. He is found behind the scenes with overalls on and sleeves rolled up. His contribution is given with humility and love.”

Ex-serviceman and bikie Johnny McNamara was awarded for his dedication to taking care of elderly men and years of home service with CCS Disability Action.

Ordered by his father to join the army as a young man, Mr McNamara “saw bad stuff” during his service overseas.

Post-traumatic stress disorder made him a violent man but joining a motorcycle gang was his saviour, he said.

“Bikies are given a bad name but you’ll see hundreds and hundreds of bikie fullahs against family violence and against suicide.”

As he got older and looked after old men, he got better and better, he said.

Through experience in the field, he shares a bond with a 98-year-old World War 2 veteran. Partial to Glenfiddich Scotch, Mr McNamara has promised to join the gentleman in a dram of whisky to celebrate his 100th birthday.

“So I do everything I can to keep him warm and comfortable.”